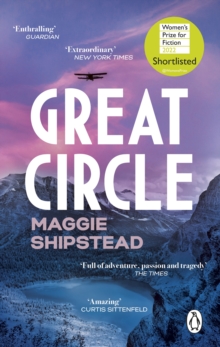 Glides seamlessly through the 20th century, immersing the reader'TELEGRAPH, Best Fiction of 2021'How deeply we care about each of these people.

Extraordinary'NEW YORK TIMES'Wonderful. Memorable characters and vivid storytelling'GOOD HOUSEKEEPING MAGAZINE'A tour-de-force'DAILY EXPRESSA soaring, breathtakingly ambitious novel that weaves together the astonishing lives of a 1950s vanished female aviator and the modern-day Hollywood actress who plays her on screen. _______________________From her days as a wild child in prohibition America to the blitz and glitz of wartime London, from the rugged shores of New Zealand to a lonely iceshelf in Antarctica, Marian Graves is driven by a need for freedom and danger. Determined to live an independent life, she resists the pull of her childhood sweetheart, and burns her way through a suite of glamorous lovers.

But it is an obsession with flight that consumes her most. Now, as she is about to fulfil her greatest ambition, to circumnavigate the globe from pole to pole, Marian crash lands in a perilous wilderness of ice. Over half a century later, troubled film star Hadley Baxter is drawn inexorably to play the enigmatic pilot on screen.

It is a role that will lead her to an unexpected discovery, throwing fresh and spellbinding light on the story of the unknowable Marian Graves. _________________________________________'Extraordinary' NEW YORK TIMES'Full of adventure, passion and tragedy' THE TIMES'Soars from the very first page' SUNDAY EXPRESS'Luminous, masterful.

Immense story with beautifully created characters***** A 600 page turner that you are sad to finish***** The story is so well researched and planned; historical fiction standing side by side with history itself***** This is a stunning achievement, my perspective feels fundamentally transformed through reading it***** A wonderful saga, covering a large chunk of the twentieth century