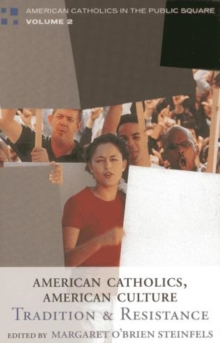 Part of the American Catholics in the Public Square series

Sheed & Ward, in partnership with Commonweal magazine, presents the second of two volumes in the groundbreaking series, American Catholics in the Public Square, a project funded by The Pew Charitable Trusts.

Part One, "Against the Grain," explores the philosophical and practical differences between Catholicism and American culture on issues in sexuality, marriage, abortion, stem cell research, women's rights, and physician-assisted suicide.

The essays attempt to mediate the divide between Catholicism's communal and personalist view of the human person and the American preference for autonomy and pluralism.

Part Two, "Popular Culture & Literature," confronts the role and interaction of the Church in popular culture and explores the identity of the "Catholic" writer on the literary page and in the media.

Part Three, "Anti-Catholicism: The Last Acceptable Prejudice?" endeavors to define what anti-Catholicism is, where it is found in North American culture, what it means for maintaining group identity, and how it can be interpreted as an American or religious phenomenon.