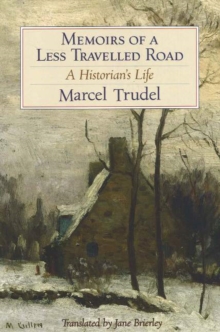 Memoirs of a Less Travelled Road : A Historian's Life

By: Trudel, Marcel,  Brierley, Jane(Translated by)

This is the absorbing and candid story of Marcel Trudel's journey from the small village of Saint-Narcisse-de-Champlain, where he was born in 1917, to become one of Canada's major historians.

Trudel recreates his youth as the child of a poor family that broke up after the early death of his mother, and the years with his adopted family where, as a lonely child, he learned to love books.

His lively descriptions draw the reader into the now-vanished world of life of a boarder in the strictly regimented colleges classiques of his day, and later the vicissitudes of academic life.

A brilliant student and tireless researcher, Trudel nevertheless had an intrepid streak that drove him to challenge accepted attitudes, despite reprimands and setbacks.

At crucial moments of his life, he took "the road less travelled by", and that made all the difference.