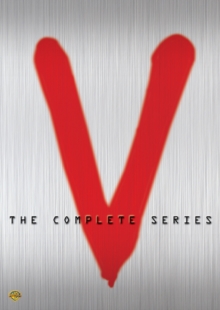 All 19 episodes of the sci-fi series about humanity's attempt to survive an alien invasion.

Following on from the earlier miniseries 'V' (1983) and 'V: The Final Battle' (1984), this series continues one year after the 'Resistance' defeated the alien 'Visitors'.

With alien leader Diane (Jane Badler) under detention and facing trial for crimes against humanity, all seems well.

However, when Diane manages to escape, joining up with a Visitor fleet waiting on the far side of the moon, she immediately sets about rejoining the alien fight, plotting to destroy Los Angeles with a space-based particle beam weapon.

If that's not enough, the Visitors have also realised the importance of the newly born half-human, half-alien Starchild to their future survival prospects, and set a trap to catch her and use her DNA.