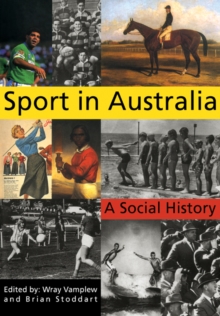 Sport in Australia : a social history

Australia is often seen as a sport-obsessed nation, its people besotted with watching and playing sport.

This book is an exciting survey of Australia's sporting life since white settlement.

It deals comprehensively with the history of a range of individual sports in Australia, including cricket, horse-racing, netball, rowing, tennis, lawn bowls, swimming and surfing and the various football codes.

Leading sports historians look at the impact of professionalization and commercialization on many sports, the link between sport and nationalism, the successes of Australian sport in the international arena and the effect of the communications revolution on sport.

The book shows that class prejudice, sexual segregation and racial discrimination have permeated Australia's sporting history, arguing that sport in Australia has not taken place on a level playing field.