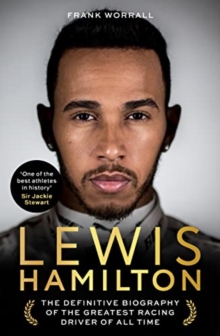 Lewis Hamilton : the definitive biography of the greatest racing driver of all time

The biography of the record-breaking world championAfter equalling Michael Schumacher's records in both race wins, and world titles, in 2020, Lewis Hamilton became the joint-most successful racing driver of all time - and the most dominant and successful Briton ever to drive in Formula 1. Hamilton's debut season in 2007 won him fans around the world, and his place in Formula 1 history was sealed the following year when he became the youngest ever world champion.

In the years since, he has created headlines on and off the track with his rivalries with Max Verstappen, Nico Rosberg and Sebastian Vettel and relationships that have landed him on the front pages of the tabloids.

However, despite the media glare, he has continued to prove his incredible talent and tenacity and remains utterly dominant in his sport. In this insightful biography, bestselling sports author Frank Worrall traces the slipstream of Hamilton's incredible career as the fastest driver on the planet.

This is the story of the young man who went from being the rookie Sir Jackie Stewart said 'has rewritten the rule book' to a world champion many times over, and become Britain's greatest ever sportsman in the process.