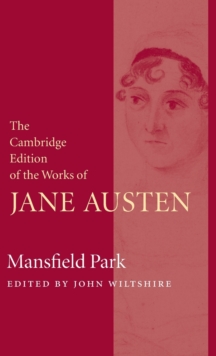 By: Austen, Jane,  Wiltshire, John(Edited by)

In recent years, Mansfield Park has come to be regarded as Austen's most controversial novel.

It was published in two editions in her lifetime and here the 1814 and 1816 texts are fully collated for the first time.

All the variants are included on the page, allowing readers to see the differences between the first edition and the second, which include some important amendments made by Jane Austen herself.

Also included, with a brief note on Elizabeth Inchbald, is the text of Lovers' Vows, the play around which much of the plot of Mansfield Park revolves.

The volume provides comprehensive explanatory notes, an extensive critical introduction covering the context and publication history of the work, a chronology of Austen's life, and an authoritative textual apparatus.