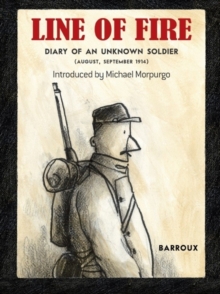 Line of fire : diary of an unknown soldier (August, September 1914)

Line of fire : diary of an unknown soldier (August, September 1914)

"We need the voice of a witness to tell the unadulterated truth.

We have it in the remarkable book." - MICHAEL MORPURGO.

One winter's morning, illustrator Barroux was walking down a street in Paris when he made an extraordinary discovery: the diary of a soldier in the First World War.Barroux rescued the diary from the rubbish heap, took the diary back to his studio and subsequently illustrated the soldier's words.

The result is a striking graphic novel adaptation of the soldier's moving and powerful account of war.The diary was discovered along with a medal and a song lyrics in the back of the diary that continue until 1917.

But there is no name in the diary - the name on the cover has long faded.

He remains the unknown soldier. We just have his words, and it is in his own words and Barroux's extraordinary pictures that his story his told.

The diary recounts the first few months of the First World War, from the moment France declares war and mobilisation is announced, until early September 1914. Our soldier's diary tells of the long journeys and endless nights; the search for food and wine; the friendships and the courage in the trenches; the sound of gunfire and the pain of swollen feet; and a narrow escape.

In the words of Michael Morpurgo, who has written a special introduction to the book, this is 'a witness statement, the untrammelled, unedited voice of someone who was there.' This is one man's story silhouetted against the great backdrop of history and the events of 1914 that formed and transformed the world we live in today. - REVIEWS - "This book should be (and will be) in every school library." -- TEACHING ENGLISH. "Line of Fire is one of the most extraordinary - and beautiful - books about the First World War. Through Barroux's wonderful illustrations readers emphasise absolutely with the soldier's experience." -- LOVE READING. "Amongst the many commemorations of The Great War, Line of Fire truly stands out as a remarkable piece." -- PAUL GRAVETT. "A timely and very different read about the hell of war, suitable for primary up." -- OBSERVER. "Children's Book of the Week' in the SUNDAY TIMES -- Feb 2014. "An unusually personal view of World War I's early days." -- KIRKUS REVIEWS. "An unforgettable reading experience for readers of all ages." -- KIDS READS. "A truly remarkable graphic novel...Line of Fire is a brilliant and devastating account of one man's part in the war, all the more poignant because it is told in his own words...It is a book for all." -- THE ILLUSTRATED FOREST.