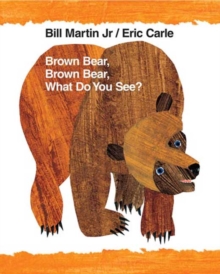 Part of the Brown Bear and Friends series

With more than two million copies sold, Brown Bear, Brown Bear, What Do You See? has opened up a world of learning to a generation of children. For this edition, created for the twenty-fifth anniversay in 1992, Bill Martin, Jr., restored his text to its original wording. And Eric Carle created all new pictures--based on the originals, but clearer, brighter, and truer to the colors they represent.