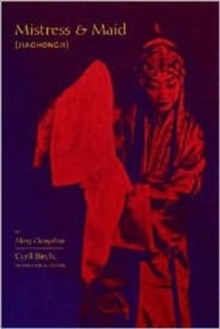 Part of the Translations from the Asian classics series

Mistress & Maid, one of the greatest tragedies of Chinese drama, is here available for the first time in English.

After her father reneges on her marital pact, Bella refuses to renounce her love for Shen, with whom she has vowed to share "in life one room, in death one tomb." The subversion of both conventional morality and the arranged marriage through vivid drama and witty comic scenes makes this seventeenth-century play particularly innovative.

Chinese critics have hailed it as essentially revolutionary for its depiction of youthful resistance to latter-day Confucian values, but as Birch notes in the introduction, "the glory of Mistress & Maid is the tender delicacy of the lovers' interactions." This depth of feeling also distinguishes the play from others of the "talent-meets-beauty" genre so prevalent during the late-imperial age.