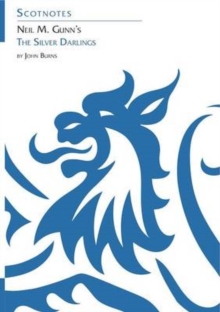 Writing over a period that spanned the Great Depression, the political crises of the 1920s and 1930s, and the Second World War and its aftermath, his novels reflect a search for meaning in troubled times, both past and present.

Considered a modern classic, The Silver Darlings is set in Caithness in the early nineteenth century, in the aftermath of the Highland Clearances, and describes how people, removed from the land, have to learn a new way of life living by the sea.

Published in 1941, during some of the most desperate days of the Second World War, The Silver Darlings is a novel suffused with hope for the future, a heartening exploration of how, though confronted by darkness, we can still move towards the light.

This SCOTNOTE study guide examines the social, cultural and political background of the novel, and explores its themes and characters.

This guide is suitable for senior school pupils and students at all levels.