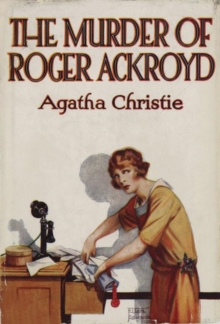 Part of the Poirot series

This is a facsmile first edition hardback of the Poirot books, published to mark the 80th anniversary of his first appearance and to celebrate his new-found success on television.

Roger Ackroyd knew too much. He knew that the woman he loved had poisoned her brutal first husband.

He suspected also that someone had been blackmailing her.

Now, tragically, came the news that she had taken her own life with a drug overdose.

But the evening post brought Roger one last fatal scrap of information.

Unfortunately, before he could finish the letter, he was stabbed to death!

To mark the 80th anniversary of Hercule Poirot's first appearance, and to celebrate his renewed fortunes as a primetime television star, this collection of facsimile first editions will be the perfect way to enjoy these books in their original form - 15 novels and one short story collection.

Reproducing the original typesetting and formats of the first editions from the Christie family's own archive copies, these books sport the original covers which have been painstakingly restored from the best available copies, reflecting five decades of iconic cover design.