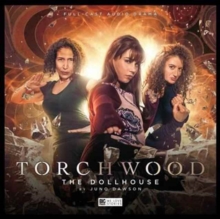 Part of the Torchwood series

The hit BBC series is back! Big Finish bring immortal Time Agent Captain Jack Harkness and his worldwide Torchwood colleagues back to audio life for a fresh run of six new audio dramas. 1970s Los Angeles - the city of angels and broken dreams.

So many young girls come to this city hoping for something better.

For some, luck is just around the corner. For others that golden ticket never arrives and they just fade away.

But it's not that simple. Everyone has a value to someone, and Torchwood are about to discover Hollywood's darkest secret.

The huge and long-running public interest in new Torchwood adventures resulted in a server melt-down when its return on audio was announced by star John Barrowman on his Sunday night radio slot.

This release is something special - an all-new line up tell an American Torchwood tale.