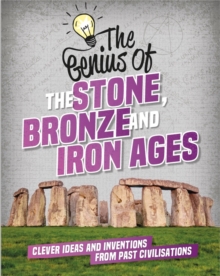 The genius of the Stone, Bronze and Iron Ages : clever ideas and inventions from past civilisations

Part of the The Genius of series

Which genius ideas and inventions began in the Stone, Bronze and Iron Ages?

This period, stretching from the first ancestors of modern humans to the start of the ancient civilisations of Greece and Rome, was a time of amazing developments.

Find out how the discovery of how to make fire and tools, farm the land and form symbols to communicate in writing transformed society and had a lasting impact on the way we live today. The Genius Of series helps children aged 9 plus to explore the major discoveries, inventions, influence and legacies of key periods in history.

Titles in the 8-book series look at the genius of: the ancient Egyptians, the ancient Greeks, the Anglo-Saxons, the Benin Kingdom, the Maya, the Romans, the Stone, Bronze and Iron Ages and the Vikings.