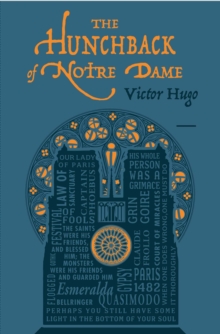 The hunchback of Notre Dame

The hunchback of Notre Dame

Victor Hugo's The Hunchback of Notre Dame was written in 1831, at a time when the Notre Dame Cathedral in Paris was falling into disrepair. This epic novel helped spark a preservationist movement that led to the cathedral being restored to its full glory. Set in 1482, the story tells of how four men-the hunchbacked bell-ringer, Quasimodo; the archdeacon of Notre Dame, Claude Frollo; the dashing soldier Phoebus de Chateaupers; and the poet Pierre Gringoire-vie for the love of Esmeralda, a young Romani woman. As the story unfolds, readers come to realize that the focus of the story is not only on the human characters but on the grand cathedral itself.