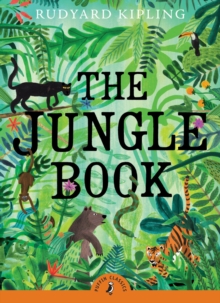 By: Kipling, Rudyard,  Paolini, Christopher(Introduction by)

Puffin Classics - the world's favourite stories - relaunched with exciting new covers. The Jungle Book is a classic story of friendship between man and beast. Saved from the jaws of the evil tiger Shere Khan, young Mowgli is adopted by a wolf pack and taught the law of the jungle by lovable old Baloo the bear and Bhageera the panther.

The adventures of Rikki-Tikki-Tavi the snake-fighting mongoose, little Toomai and the elephant's secret dance, and Kotick the white seal are all part of Mowgli's extraordinary journey with his animal friends. With an introduction by Christopher Paolini. Joseph Rudyard Kipling (1865-1936) was born in India, although educated in England.

He was a prolific writer and recognized as a genius.

In 1907 he was awarded the Nobel Prize for Literature.

His many books for children include Just So Stories and Kim.

The book includes a behind-the-scenes journey, including an author profile, a guide to who's who, activities and more. The Puffin Classics relaunch includes:A Little PrincessAlice's Adventures in WonderlandAlice's Adventures Through the Looking GlassAnne of Green Gables seriesBlack BeautyHans Andersen's Fairy TalesHeidiJourney to the Centre of the EarthLittle Women seriesPeter PanTales of the Greek HeroesThe Adventures of Huckleberry FinnThe Adventures of King ArthurThe Adventures of Tom SawyerThe Call of the WildThe Jungle BookThe OdysseyThe Secret GardenThe Wind in the WillowsThe Wizard of OzTreasure Island