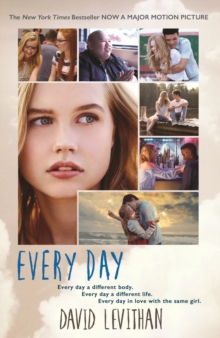 Soon to be released as a major motion picture, from the team behind Everything Everything. From the genius of David Levithan, co-author of Will Grayson, Will Grayson, and Nick and Nora's Infinite Playlist, comes a love story like no other you've read before. Each morning, A wakes up in a different body. There's never any warning about who it will be, but A is used to that.

Never get too attached. Avoid being noticed. Do not interfere. And that's fine - until A wakes up in the body of Justin and meets Justin's girlfriend, Rhiannon.

From that moment, the rules by which A has been living no longer apply. Because finally A has found someone he wants to be with - every day . . . A stunningly original novel that will make you view the world from a different perspective.

You can also read Rhiannon's side of the story in Another Day. Levithan's powerful novel explores the complexities of first love in a unique way that will captivate anybody who loved Rainbow Rowell's Eleanor & Park and Jandy Nelson's I'll Give You the Sun. Have you read David Levithan's other ground-breaking novels?Another DayHow They Met and Other StoriesMarly's GhostTwo Boys KissingAnd in collaboration with Rachel Cohn:The Twelve Days of Dash and LilyNick and Norah's Infinite PlaylistNaomi and Ely's No Kiss ListDavid is the New York Times best-selling author of Boy Meets Boy and Marly's Ghost.

While among his many collaborations are Will Grayson, Will Grayson with Fault in Our Stars author John Green.

David's latest collaboration with Rachel Cohn, The Twelve Days of Dash and Lily, was picked by Zoella for her Book Club with WHSmiths.

He lives and works in New York.