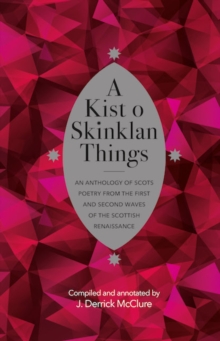 A kist o skinklan things : an anthology of Scots poetry from the first and second waves of the Scottish Renaissance

By: McClure, J. Derrick(Edited by)

Beginning in the 1920s, Scottish writers increasingly engaged with contemporary social and political issues, and with questions of national identity.

An integral part of this development was the radically new literary status accorded to the Scots language.

MacDiarmid's immediate predecessors had introduced modern themes and linguistic experimentation to Scots poetry; and though MacDiarmid is the unquestioned central figure in the great poetic revival, he rode a rising tide.

He and the poets who paved the way for him represent the first wave of the Scottish Renaissance.

The second wave contains the extraordinary company of poets who wrote under his direct inspiration.

On any showing, the scale and quality of this movement is a phenomenon rarely paralleled in literary history.

A Kist o Skinklan Things contains a selection of the best work from this great period.