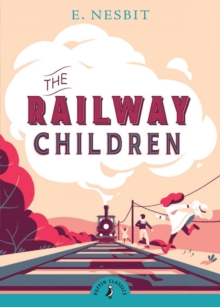 By: Nesbit, Edith,  Wilson, Jacqueline(Introduction by)

The Railway Children is the classic children's story by E.

Nesbit. When Father is taken away unexpectedly, Roberta, Peter, Phyllis and their mother have to leave their comfortable life in London to go and live in a small cottage in the country.

The children seek solace in the nearby railway station, and make friends with Perks the Porter and the Station Master himself.

Each day, Roberta, Peter and Phyllis run down the field to the railway track and wave at the passing London train, sending their love to Father.

Little do they know that the kindly old gentleman passenger who waves back holds the key to their father's disappearance. One of the best-loved classics of all time, with a wonderful introduction by Jacqueline Wilson. Edith Nesbit was a mischievous child who grew up into an unconventional adult.

E. Nesbit turned late to children's writing. Her first children's book, The Treasure Seekers, was published in 1899 to great acclaim.

Other books featuring the Bastable children followed, and a series of magical fantasy books, including Five Children and It also became very popular.

The Railway Children was first published monthly in the London Magazine in 1905, and published as a book in 1906, which has been in print ever since. Other children's books by E Nesbit:The Story of the Treasure Seekers; The Wouldbegoods; The New Treasure Seekers; Complete History of the Bastable Family; Five Children and It; The Phoenix and the Carpet; The Story of the Amulet; The House of Arden; Harding's Luck; The Railway Children; The Enchanted Castle; The Magic City; The Wonderful Garden; Wet Magic; Five of Us and Madeline