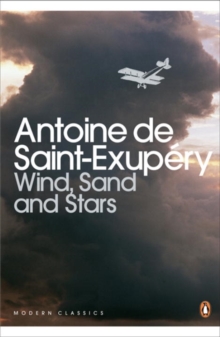 Both a gripping tale of adventure and a poetic meditation, Antoine de Saint Exupery's Wind, Sand and Stars is the lyrical autobiography of an aviation pioneer, from the author of The Little Prince.

This Penguin Modern Classics edition is translated from the French with an introduction by William Rees. In 1926 de Saint-Exupery began flying for the pioneering airline Latecoere - later known as Aeropostale - opening up the first mail routes across the Sahara and the Andes.

Wind, Sand and Stars is drawn from this experience. Interweaving encounters with nomadic Arabs and other adventures into a richly textured autobiographical narrative, it has its climax in the extraordinary story of Saint-Exupery's crash in the Libyan Desert in 1936, and his miraculous survival. 'Self-discovery comes when a man measures himself against an obstacle,' writes Saint-Exupery.

This book explores the transcendent perceptions that arise when life is tested to its limits.

His first two books, Southern Mail and Night Flight, are distinguished by a poetic evocation of the romance and discipline of flying.

Later works, including Wind, Sand and Stars and Flight to Arras, stress his humanistic philosophy.

Saint-Exupery's popular children's book The Little Prince is also read by adults for its allegorical meaning.

Saint-Exupery's plane disappeared during a mission in World War II. If you enjoyed Wind, Sand and Stars, you might like Woody Guthrie's Bound for Glory, also available in Penguin Modern Classics. 'A Conrad of the air ... Like Conrad, Saint-Exupery is a poet of action'Andre Maurois