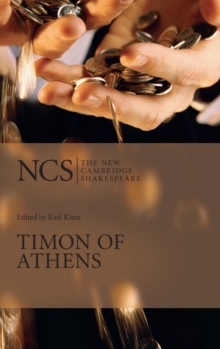 Part of the The new Cambridge Shakespeare series

Karl Klein's edition of Timon of Athens introduces Shakespeare's play as a complex exploration of a corrupt, moneyed society.

Klein sees the protagonist not as a failed tragic hero, but as a rich and philanthropic nobleman, surrounded by greed and sycophancy, who is forced to recognise the inherent destructiveness of the Athenian society from which he retreats in disgust and rage.

Klein establishes Timon as one of Shakespeare's late works, arguing, contrary to recent academic views, that evidence for other authors besides Shakespeare is inconclusive.

The edition shows that the play is neither tragedy, satire nor comedy, but a subtle and complete drama whose main characters contain elements of all three genres.

This edition was near completion at the time of Karl Klein's death, and was prepared for publication by his colleagues and by Brian Gibbons.