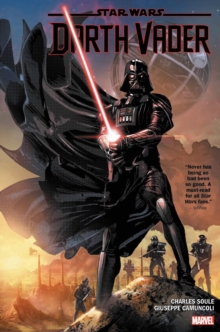 By: Soule, Charles,  Camuncoli, Giuseppe(Illustrated by)

Part of the STAR WARS series

Marvel Comics
1302931733 / 9781302931735
Hardback
741.5
07/12/2021
Published 07/12/2021
United States
English
Graphic novels
28 cm 624 pages : chiefly illustrations (colour)
General (US: Trade)  Learn More
Lord Vaderrise! Picking up directly where Star Wars: Episode III Revenge of the Sith ends, follow Vader as he ascends to power as a Dark Lord of the Sith! Having lost everything dear to him and now more machine than man, Vader takes his first steps into a darker world beginning by eradicating the galaxy's remaining Jedi! But librarian Jocasta Nu is making a desperate effort to preserve the religion's legacy and the stirrings of a rebellion have begun in the Mon Cala system! To ensure the Emperor's grip on the galaxy is absolute, Vader must deal swiftly and brutally with any uprisingsbut he has a goal of his own. And as darkness rises above Mustafar, scene of Vader's greatest defeat, will the man once called Anakin Skywalker realize his true destiny?