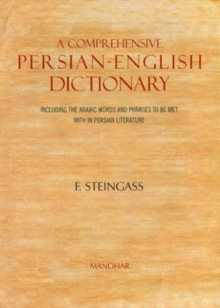 Comprehensive Persian-English dictionary : including the Arabic words & phrases to be met with in Persian literature

The lines originally laid down for this Dictionary were, to prepare a revised edition of Johnsons enlargement of Wilkins-Richardsons Persian, Arabic, and English Dictionary, by reducing the Arabic element and increasing the Persian, so as to produce a volume specially adapted to the wants of the English students.

However, it was found that the mere reduction of the Arabic portion would not suffice to answer the purpose intended.

At the same time it was soon felt that the fresh matter to be introduced in the Persian part exceeded the limits contemplated, and necessitated in this respect a considerable extension of the primary plan.

It is hoped that this Dictionary will justify its claim to comprehensiveness.

The authors only ambition was to advance the work close to the point at which the practical adoption of the motto Viribus Unitis, with regrade to Persian, becomes a necessity, and should be seriously contemplated by oriental societies and congresses.