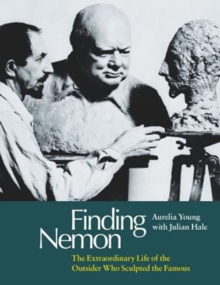 Finding Nemon : The Extraordinary Life of the Outsider Who Sculpted the Famous

The first biography of sculptor Oscar Nemon (1906-1985), the unknown artist behind some of Britain's most iconic statues. Oscar Nemon is one of the twentieth century's greatest sculptors, as testified by his iconic portraits of elder statesmen and major figures displayed all over the world.

He was a flamboyant personality who charmed those who came in contact with him, including towering figures such as Winston Churchill, Sigmund Freud and Queen Elizabeth II and countless politicians and celebrities, as well as a host of women including his long-suffering wife. Their elder daughter Aurelia has gone in search of this often infuriating yet charismatic man and reveals the stories behind his artistic and personal encounters with presidents, prime ministers, royalty and others.

She chronicles her father's life from humble origins as a Jew in modern-day Croatia to his refuge from the Nazis in southern England and the life and career he made for himself in and around London with his British wife Patricia.

The author engagingly explains how the Queen nicknamed him the `missing Oscar' and how Nemon became the subject of the only attempt at sculpture by his friend Churchill, who posed for many likenesses including a monumental bronze in the House of Commons.

The result is an intimate biography of an artist, husband and father complemented by a wealth of fascinating illustrations. Nemon's remarkable talent should have resulted in wide international renown, but he struggled for much of his early career, as many within the British establishment from the 1930s on - including Patricia's parents - were openly anti-Semitic, and they excluded him from their circles.

Yet his achievements were great and his legacy immense.

In Finding Nemon, the first biography of Oscar Nemon to appear in English, richly illustrated and beautifully presented, Aurelia Young draws her father out from the shadow of his remarkable body of work. `I greatly admire the art of Mr Oscar Nemon, whose prowess in the ancient classical realm of sculpture has won such remarkable appreciation in our country.' - Winston Churchill`His work will ensure that his name and reputation survive.' - Queen Elizabeth II`When my words are forgotten I will be remembered as an excellent example of Nemon's middle period.' - Harold Macmillan`During a lifetime that spanned most of the twentieth century Croatia-born Nemon, who fled to Britain before the Second World War, sculpted dukes, kings, queens, lords and field marshals . . . Politicians and war heroes were like putty in his presence.' - Daily Telegraph`A marvellous book by Aurelia Young on her late father, the sculptor and genius Oscar Nemon . . . Against the odds, being a Jewish refugee, Nemon's journey brings you close to the people who shaped and impacted on the twentieth century.' - Matthew Parris`Aurelia Young has learned a vast amount about her father . . . He remained elusively both outsider and insider, arguably a position occupied by many of the best artists but deeply painful at times.' - Anne Seba.